Every single business Entrepreneur/ business owner wants to maintain their own web and mobile applications with the help of custom software development company.

What is React Native?

React Native has emerged as one of the most preferred among a multitude of reasons, but the biggest reason is that React Native Mobile app development is very close to native app performance. This is because it provides code components directly to the native APIs. In addition, it also allows developers to write the heavier, more important parts of the code in the native language, be it Java or Objective-C, letting the rest of the code to be shared across platforms. Cross Platform Mobile app development boast of 80 to 90 percent code shareability.

JavaScript is the most popular programming languages of our times. It is one of the fastest, most convenient and widely-used languages and can develop cross-platform mobile app development using React Native and JavaScript is an add-on to start things off.  Stack Overflow survey says that 55.4% of developers use JavaScript for developing apps, JavaScript has one of the most used and active communities making it convenient to use globally for application development.

Updating a React Native mobile app is a lot easier and faster with JavaScript, no need to restart an app after each update, they can refresh to see the latest changes applied. In fact, Apple allows JavaScript based changes to app behavior in real time, taking away the hassle of approvals for app updates.

Why To choose React Native?

React Native Modules and Native Controls One can create apps that are native to each platform, because of it’s modules and native controls which gives relief to all the hassles associated with hybrid mobile app development. React Native uses native API’s for UI components unlike other cross-platform frameworks such as PhoneGap use WebView, doesn’t give 100% performance but using native APIs make it better than expected.

React Native community is growing rapidly in the market will be a major advantage of the native modules, there are a number of existing modules that can be used with ease. Highest percentage of code reuse in React Native. In addition, React Native also offers easy debugging tools and error messaging to make a developer’s life easier. 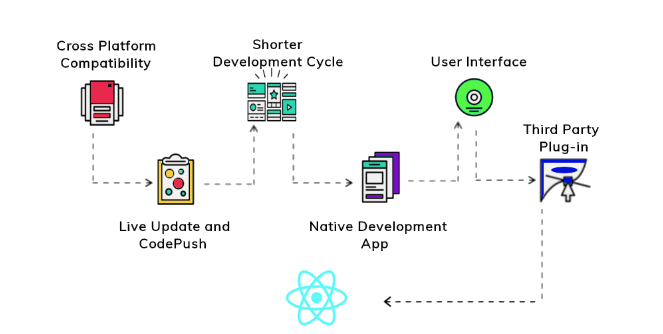 ReactJS made it ease and the functionality for web interfaces has been extended to the next level. React Native engross all the advantages that ReactJS possess, bringing the same kind of agility and power to mobile app development. It’s needed to have entire knowledge about the native language of the platform with React Native. Developers can start developing native mobile apps for both Android and iOS if they are expertise in JavaScript and React syntax.

Live reload is an outstanding feature of React Native which helps you to view the changes of your code modification on the UI in real-time. Developers can manage two windows by monitoring the changes in UI by modifying the code. They are able to see every little change they made in code which reflects in UI, this feature increases the application performance and also make it super exciting.

We can split the UI into independent, reusable pieces called components. Great User Interface is possible because of components of React. As we can reuse components, there is no code duplication.

Easy to maintain code base

React native has large community to help. There are a lot of free and open source projects which help to development.

React Native is easy to learn and efficient. App is compiled into native code, which enabled to work on both the operating systems and functions the same as both platforms with no issues. Other advantages of using react-native is faster development, reusability of components.

React native has its own StyleSheets to create a better UI(User Interface).  It is similar to CSS StyleSheet. We don’t need any knowledge of CSS to learn it. It is very easy to learn and implement.

As it is providing Hot reloading functionality, development time will be saved. When we modify any file in code base app will automatically get reloaded, no need to manually reload the app each time we modify the code.

Posted On 08 February 2019 By MicroPyramid

React vs Flutter - Which is preferred for you?